How to ensure your children are well adjusted members of society

November 18, 2011
My brother posted this on my bookface wall last night.


I laughed and laughed and laughed. Not only because it made me think of my favourite childhood stories but because it reminded me of an incident that occurred a few days after I moved in with John. When John married me he knew that he was not only getting a totally badass wife but he was getting one of the weirdest collections of books he had ever seen. In that most peculiar collection was a book from my childhood titled, "Struwwelpeter". As he flipped through it he was slightly horrified (and by slightly horrified I mean he wondered what kind of woman he married) and asked, "Were you seriously told these stories when you were little?" He can't read German but he could figure out what was going on from the pictures. 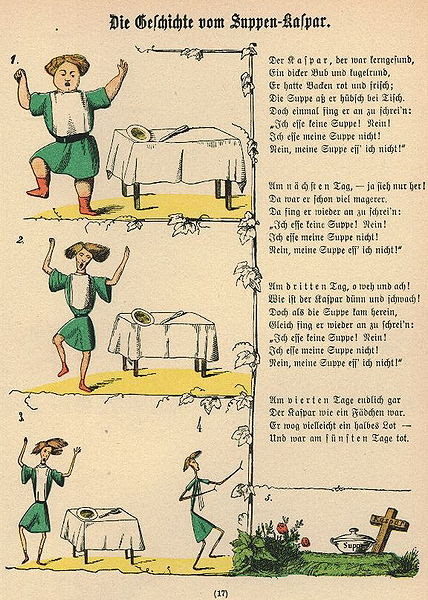 1. Always eat your soup or you will sit at the table until you eat it...if you don't you will die of starvation.
2. Don't suck you thumbs or the town tailor will come by and cut them off with giant scissors.
3. Don't rock back and forth in your chair at the dinner table or you'll fall backwards, pulling everything off the table in the process and you'll die.
4. If you play with matches you will burn to ashes and the fire will be put out by the tears of your beloved pet cats.
5. If you go out in a storm even though you've been told not to the wind will carry you away never to be seen again.
6. If you're mean to animals a big dog will bite you, you'll get a blood disease and the dog that bit will get to eat your dinner.
7. If you don't pay attention when you're walking you'll fall in the river much to the amusement of the fish.
8. If you don't comb your hair and other wise keep yourself well kept you will be publicly shamed and ridiculed.

Are you noticing a common theme? If you're bad, you will die, disappear or drown. If you're lucky might just get off with a good old fashioned public ridicule and finger pointing. 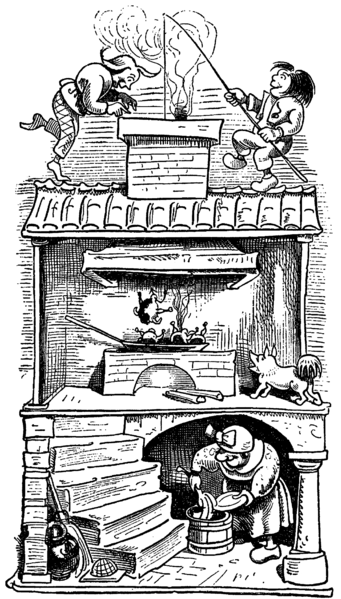 My grandparents were told these stories by my great-grandparents. My parents were told these stories by my grandparents and they were told to my brother and I by my parents. This is how it was for not only us but thousands of other German kids. When you're a German kid in a very German family you're also told about the evil stepsisters in Cinderella cutting off parts of their feet to fit into the glass slipper. That after rescuing Little Red Riding Hood and Grandma from the stomach of the wolf the hunter replaced them with rocks and the wolf drowns when he fell into a pond when he walks up from his nap. Oh AND that St. Nikolaus will beat you if you're bad (this lead to me being absolutely convinced St. Nikolaus and Santa Claus being different people.)

Lets not forget the stories of Max and Moritz who are two jerks who in the end of the story after playing a bunch of tricks on people end up being made into food for geese.

My husbands response to all of this? "Why would you tell your kid this stuff?!"

Here's the thing, I never had nightmares about this stuff, I made it out of my childhood pretty unscathed for the most part regardless of the fact that I was told I would die if I disobeyed and I never felt overtly traumatized by these little German fables. Despite the fact I was told I would have my thumbs cut off (I sucked my thumb until I was 6 or 7) I turned out to be surprisingly well adjusted. Although...I do wonder if these stories have anything to do with my intense fear of geese.

And a parting gift, my favourite, Suppen Kaspar!

about me childhood family