The husband suggested I blog about my novel progress. Someones been reading my blog again. He's been away for 10 days and in those 10 days I threw caution to the wind and spend the majority of those 10 days writing. Personal hygiene and a balanced diet be damned I was writing a novel.

Don't worry I didn't spend the ENTIRE time he was gone in a hermit like state no, I did get out and do things for fear of suffering from a vitamin D deficiency and that I might forget how to conduct myself in civilized society (like I knew how to do that to begin with.)

I will say when I embarked on my 5th attempt at 30 days and 30 night of literary abandon I didn't know what to expect. This is the first time I'm attempting this when I don't have a whole lot on my plate. So I thought this would be a dream situation in which to write. Yeah...not so much. Do you know how distracting life is when you're inside writing? Kind of like being the kid with a broken arm during summer break. All you want to do is be outside doing stuff. Doesn't matter what that stuff is, it could even be stuff that you don't normally want to do but you would give anything to be out there having an adventure. Yeah, that was me.

This was all compounded by the fact that 2 weeks in I hated my story. Here's the thing, my story was personal. Very personal. It was not only my story but my families story. If you read this blog post you'll know that I didn't feel I would be respecting the story if I wrote it during NaNo. Like I said to my mother, "It's not like I can kill one of my cousins because I have writers block." And I was pretty sure there were no ninjas involved in my Opa's coming to Canada (those stories by the way are amazing stories in and of themselves.) So I abandoned good ship "that book" and restarted.

What I have been writing is ridiculous and hilarious shenanigans. It's amazing what happens in a story that has characters who are nothing but criminals working for the FBI's behavioural analysis unit. I am pretty sure it is very far from being accurate in anyway. But it's a heck of a lot of fun to write. Of all I've written thus far I am most proud of my opening.


Personal log # 8675309
Most bad guys turn out to be the jock or the creepy old guy who lives in the mythical “murder house” that every small town seems to have. Or perhaps the mean girl, or that emo social outcast who prefers to live their life as a Cyclopes with their hair over one eye. Maybe that lady you thought was just a nice old spinster who knitted scarves and happy to like cats, lots and lots of cats. Maybe that doctor with the dodgy mustache. That obvious Criminal   maybe, you know the one carrying the big sack with the money sign and the mask over his eyes. Possibly if you are someone lucky enough to have superpowers it is your arch nemesis who has mastered the art of the maniacal laugher. Here is a crazy thought though, what if…what if you are the bad guy. The horrible person. The terrible horrible no good very bad person you have to find. What if you are it? 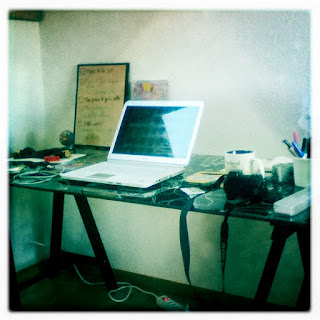 Nope it's not great Canadian literature but you know what? It's fun. Lots of fun. It's not without writers block though. I hate writers block. Or as I read recently, "Writers block: when your imaginary friends stop talking to you." I hate that. Usually when I had writers block I grab a boozy beverage of some kind and have a chat with the husband. We have our best ideas in these situations. That's how we came up with the plot I've been working on. It's the reason I carry a moleskin note book with me every where, just in case we have one of the fabulously wonderful conversations that act as my muse. Okay that an I'm neurotic and I always have to have a notebook. Since he was away I found myself watching endless episodes of Criminal Minds looking for inspiration instead. It was the best of times and it was the worst of times. But it got me through.

Note to self: Don't watch an entire season in one sitting when you're home alone. Bad idea.

Oh and occasional living room dance party for one worked too.

I'm hoping to hit 50k by the end of the week. Whether I keep going passed 50k I'm not entirely sure. We'll see. And considering there is a pair of shoes in it for me if I do surpass 50k I just might....and by that I mean, for new shoes I'll do anything.
National Novel Writing Month