Well the official writing of 50,000 words in 30 days starts. NaNo pre-gaming has been happening in Masion du Ham-tin for the last 3 weeks.

Suddenly every single item of laundry was done, folded and put away even things he didn't even know were laundry.

Our closet was organized.

The entire apartment was swept and dusted within an inch of its life.

Our glass cook top was as clean as the day we moved in.

The pantry was organized.

A mysterious red notebook kept appearing in places around the apartment.

I am furiously scribbling notes in the aforementioned notebook.

I created my bag of snacks and treats to save me from rummaging for comestibles.

I've been muttering about sub-plots, character development and dialogue.

I am carrying my copy of "No Plot No Problem" with me every where.

NaNoWriMo was upon us once again.

I was unusually ahead of the game in the plot department. Meaning, I had one. This year was looking good. It was positively coming up Tatiana.

The husband bought me an itune gift card so I could load my ipod with writing music. He kept using phrases like, "Well we won't worry about that you'll just spend November writing." He gave my idea for a plot a ringing endorsement. For the first time in my 5 year NaNo history (yes I've been doing NaNo for as long as I've been married) he was truly embracing everything he could about this cockamamie misadventure and throwing his full support behind it.
And he even  helped me come up with the ever important bribe/incentive list.

Now I still have Johns support, I still have my notes. I still have an apartment that is so clean and tidy it would make my mother weep tears of joy and "finally!!" Everything is ready to go...except....except my plot.

I abandoned my plot yesterday. And it was a good plot too.

I went to the NaNoWriMo kickoff in Bern yesterday and I not only met a fellow Canadian a fellow Winnipegger. Someone from HOME! Someone who knew what I meant when I said, jambuster (and knew I wasn't referring to myself) or "Vj's puts pickles on their hot dogs and I miss that" or "-30 isn't really that cold." Home...there was a piece of home sitting in a starbucks in the middle of Switzerland. Not only were the NaNo gods trying to tell me something but the Universe was trying to tell me something.

She and I got into a discussion about how many of the best Canadian writers are from Manitoba and wax poetic about Winnipeg or other places in Manitoba. There is something truly beautiful about our still amazingly vibrant city. There is something in the air in Manitoba that makes all of us who call it home want to write about it, think about it, breath it, when you leave. I even mentioned that one Canada's most prolific writers didn't start writing about her hometown in Manitoba until she lived in England for several years. I even told her all I want to do is write about home.

Then that not so still and not so small voice in my heard screamed, "THEN WHY AREN'T YOU WRITING ABOUT HOME!!!????" 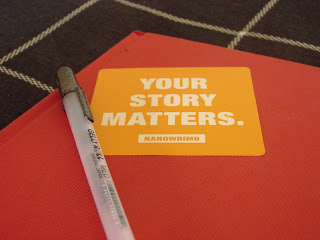 Admittedly the notion of a FBI BAU team made up of ex-cons sounds FASCINATING and would be totally  awesome to write.

And I like the idea of writing about home.

Amazing what happens when you run into a Winnipegger in a Starbucks.
National Novel Writing Month