John and I had the following email exchange this morning,

Tatiana: I found a Bern NaNo writing group! They have a kick off on the 30th at the starbucks near the train station.

Johnathan: Duly noted and entered into the minutes.I motion that I implement my annual eye-rolling and brief show of scoffing. Do I have a second?

Tatiana: Seconded! Motion passed. Next on the adgenda,

2. how does the male in the relationship plan on dealing with
NaNoWriMo this year? I plan to lay in a month's supply of canned food and retire to the bomb shelter

I love him. I think I will keep him 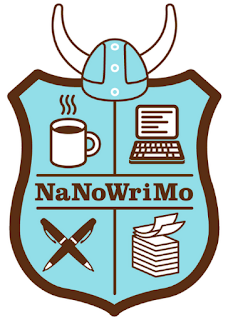 Yes I'm doing National Novel Writing Month again. Or as John likes to call it, "Arbitrary word count in an arbitrary amount of time" month. It's my fifth year. I've failed at it twice and done the exhausted happy dance of victory twice. This year will be interesting because I won't be juggling real life and writing. I'm not working full time, I'm not sitting on any derby committees. I'm not having much of a life. Which I'm surprisingly cool with!
If you have no idea what the hell I'm talking about I'm talking about National Novel Writing Month (NaNoWriMo) which is 30 days and 30 nights of literary awesomeness.
Let me, let their website explain it,
National Novel Writing Month is a fun, seat-of-your-pants approach to novel writing. Participants begin writing on November 1. The goal is to write a 50,000 word, (approximately 175 page) novel by 11:59:59, November 30.
Valuing enthusiasm and perseverance over painstaking craft, NaNoWriMo is a novel-writing program for everyone who has thought fleetingly about writing a novel but has been scared away by the time and effort involved.
Because of the limited writing window, the ONLY thing that matters in NaNoWriMo is output. It’s all about quantity, not quality. This approach forces you to lower your expectations, take risks, and write on the fly.
Make no mistake: You will be writing a lot of crap. And that’s a good thing. By forcing yourself to write so intensely, you are giving yourself permission to make mistakes. To forgo the endless tweaking and editing and just create. To build without tearing down.
As you spend November writing, you can draw comfort from the fact that, all around the world, other National Novel Writing Month participants are going through the same joys and sorrows of producing the Great Frantic Novel. Wrimos meet throughout the month to offer encouragement, commiseration, and—when the thing is done—the kind of raucous celebrations that tend to frighten animals and small children.
In 2010, we had over 200,000 participants. More than 30,000 of them crossed the 50K finish line by the midnight deadline, entering into the annals of NaNoWriMo superstardom forever. They started the month as auto mechanics, out-of-work actors, and middle school English teachers. They walked away novelists.
I can't explain the feeling that I felt the morning after I won NaNo for the first time. The Barista at starbucks asked me what I did that weekend, I said, "I finished writing my novel." Amazing.
I will be honest though, the two novels that "won" me NaNo as crap. They're absolutely crap. But you know what? It's mine. All mine. So it doesn't matter that they will never see the light of day it's the fact that those exist is the best part.
Admittedly, there have been books that have been published as a result of NaNo. The first draft of "Water for Elephants" was written during NaNo (here's a more complete list of published books that were drafted during NaNo). NaNo has offered the opportunity to get that book that's banging around in your head out.
What am I writing? I don't really know yet. I'm playing with idea. I keep a book of NaNo ideas every year. The book I USUALLY use is in storage (shocking) so this year I need a new books and new ideas.
PS. John is actually very supportive of NaNo regardless how much he jokes about it.
PPS. We do actually have a bomb shelter that we have access to.
PPPS. It doubles as our storage unit.
National Novel Writing Month