A long way from "Math is tough"

September 19, 2011
Two weeks ago I bought myself a barbie. Yes I'm a 27 year old married woman but this barbie was important. Very important. The reason for it's purchase goes all the way back to when I was 7 years old and a life altering conversation I had with my Dad one Saturday. I remember everything about the conversation like it happened yesterday.

It was 1992 and I DESPERATELY wanted one of these.

I wanted it so bad. All my friends wanted them too. For whatever reason I felt I NEEDED a talking barbie. I will say right now though, it's not like I had a lot of barbies. I played with my moms hand me down barbies and I had a small few new ones I had gotten for my birthday and Christmas (don't ever ask my dad about trying to find me a Jem doll unless you have time to spare.) I never owned the dream house (though one of my friends did...wasn't that always the case?) but I did have barbies sky chalet. Which by the way I LOVED but if you looked at it wrong it fell apart.

This is the conversation I remember having with my Dad regarding the procurement of my coveted barbie that said over 100 thousand things (the commercial said so therefore it must be true.) It was Saturday. My mom was at work. I am standing on the stairs that lead to the second story of our house. I'm about three stairs up. My Dad was in front of me. He was putting on his shoes. We were going somewhere (no idea where.) I said, "Daddy, can I have a talking Barbie?" He turned and said, "No, I can't let you have one of those." We were at eye level with each other. Now, we didn't have a lot of money when I was a kid so it wasn't an uncommon response to me but my dad continued, "She says somethings that we don't like." All I remember saying was, "Oh." My dad went on to say, "She says, math is hard. We know you think math is hard but we don't want Barbie telling you that. We don't think Barbie should be telling little girls that."

In that moment, a seed was planted. I firmly believe I am a feminist because of that conversation. I remember thinking, "Wow barbie shouldn't be telling little girls that at all!! That's bullshit!" I had the privilege of growing up with parents who when ever someone commented on my looks as a child immediately piped up, "she's smart too." So this talking Barbie that I just HAD to have was going against everything I was being taught. She wasn't pretty AND smart. She was just pretty. Not cool. 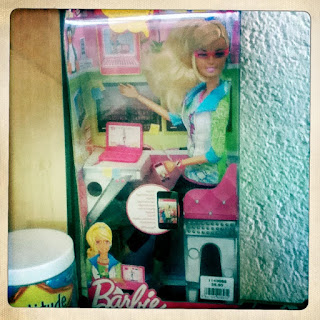 Fast forward to last year. I stumble upon an article about the new "I can be..." Barbies. Careers 125 and 126 were News Anchor and Computer Engineer thanks to a global online vote. I did a happy dance after reading about Computer Engineer Barbie. Oh how far we've come!! I distinctly remember emailing John at work saying, "Look, finally, a Barbie I WANT to buy our goddaughter and niece!!"

I will say I know Barbie has been a vet, a doctor and a few other things that require a whole lot of book smarts. But this, this computer engineer barbie was the complete antithesis of "Teen Talk Barbie" from 1992. Obviously math class wasn't that tough anymore.

Two weeks ago I was in a department store. I wandered into the toy department, because I don't care that I'm 27, I still love the toy department. That's when I saw her. Computer Engineer Barbie. Incidentally, she was right next to roller skating barbie and skipper (they had helmets but no other safety equipment this bothered me).  I picked her up and just stared. I had tried to track her down when I was in New York last year when I was at FOA Schwarz but she hadn't been released yet. I smiled and said to my self, "Math isn't that hard is it now?" I bought her. I took her home. I put her in my office. On my desk so I can look at it when I'm writing and creating. So I could remember that I was pretty and smart.

John smiled when he saw her. Though he did wonder why there were no dark circles under her eyes. He also asked if there was an IT Ken or perhaps a Help Desk Skipper.

Thanks to being married to a Computer Magician who has many computer magician friends I am far more familiar with computer "stuff" than I ever thought I would be so I marveled at the attention to geeky detail. She has binary on her laptop screen (which I've read online reads barbie over and over), she has a tux (linux anyone?) plush, she's in a cubicle with a cubicle village behind her in the background, she has a blue tooth headset, a smart phone, a geeky tshirt, a rather large travel mug for coffee, and sensible shoes. Be still my nerdy heart.