After "how did you end up here?" the number one question is, "Where's Dylan?" As of right now Dylan is in Newfoundland with my parents. As of Saturday around 3ish he will be back in Manitoba to spend some time with my in-laws until we can can go get him ourselves or some kind hearted friend can bring him to us. *hint hint friends who are considering a visit.*

How did we end up in this situation?

It's a long story.

When we decided to move to Switzerland after the initial shock wore off we had a "come to Jesus" moment and realized, what do we do with Dylan. Now there was no question in my our minds that he was coming a long for the ride. Dylan is a member of our family. Our small, weird, but it works for us, family.  Now we went over several options. Kennel him until we find a place, take him with us immediately and have him hang out in the hotel with us until we get a place, have a friend look after him and have him shipped later. We even for a brief moment discussed giving him away. A very brief moment. When my mom was in Winnipeg with us helping us pack she offered to take Dylan until we were settled. So he flew to Newfoundland to hang out with my parents.

Dylan is a big cat. Therefore he has a big kennel. The airline we were flying has a rule about cats in the cabin which states it has to be a soft sided kennel that fits under the seat. Eeek. Also when we were flying we were unable to fly with him in cargo because during that time of year they don't allow it due to hot weather. Heaven forbid the poor thing is stuck on the tarmac. So we had to investigate other options.

Having Dylan in Switzerland was not a problem. The problem was getting him here. Regulations on importing a domestic house cat as as follows, he must be chipped (check), he must be up to date on his shots (check) and his rabies shot must be current (check.) That's all well and good. We have since learned getting Inspector Dylan here unaccompanied is going to be a challenge.

You can't put a price tag on a pet. You just can't. Or so we thought. We adopted Dylan for $30 from a no kill animal shelter. He had been there a year. He was previously with an older couple who showed their love with food. They moved into assisted living. No one wanted Dylan (formerly Diego...he's so not a Diego) so he ended up at the shelter.  We've often said he's the best $30 we've ever spent. In the process of trying to get Dylan here we've learned you can in fact put a price tag on a pet. Dylan's is 2000 almost 3000 Swiss francs. That's how much it would cost to get Dylan here unaccompanied. Why so much? Ever heard of a pet relocation company? Yeah...they're movers for pets.

In all our research, in all our reading, in all our talking with people, no one mentioned the need for a pet mover. No one mentioned that he can't be unaccompanied. We were blindsided by it. There was no way we could get him here without a broker. Getting Dylan here would be an ungodly amount of money. Every official person we spoke with in Switzerland and Canada said the same thing, it would be easier for you to come and get him and bring him here yourself. 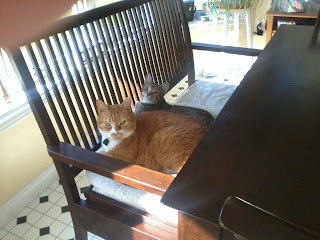 Now why is Dylan going back to Manitoba to hang out with my in-laws. Because Punk and Dylan have issues. Punk is the cat in residence. My family has had Punk since I was 15. Punk was always at the bottom of the cat totem pole in our house. But over the last few years with the passing of Kiescha and then Katja, little Punk has become alpha cat. My parents recently acquired another cat this spring. Her name is Stanza, she's a rescue (I think) and is a kitten with energy to spare. Punk tolerate Stanza. Barely. Dylan and Stanza are best friends. Punk is afraid of Dylan and Dylan keeps trying to protect my parents and Stanza from Punk (and one of the German shepherds next door...this coming from the cat that's afraid of the blow dryer.) So they need to keep Punk and Dylan separate at all times. Which isn't fair to Punk as it's her house and it's not fair to Dylan because he's pretty good natured for the most part. It's a stressful situation for all involved.

So on Saturday Dylan is off to Winnipeg after spending the summer in Torbay. If he had gotten along with Punk this would not be happening. Unfortunately cats are cats and the two of them together is a bad idea. We're back in Manitoba in June 2012 so we'll be taking Dylan home with us. Unless we come to get him earlier or someone brings him to us. So my in-laws will be Dylan minding until we can get him here. Here's hoping he doesn't try to protect them from their dog Maya (who is about Dylans weight and build so at least it would be a fair fight.)
Ask me anything

Anonymous said…
Do you still need someone to pick Dylan up? And if it doesn't work out at the in-laws he can give our place a try.
(Elissa by-the-way)
September 21, 2011 at 6:37 AM

Tatiana said…
Thanks Elissa, we've got it all worked out with the in-laws. And we'll totally keep you in mind if he needs another place to chill if the farm isn't for him.
September 21, 2011 at 10:05 AM