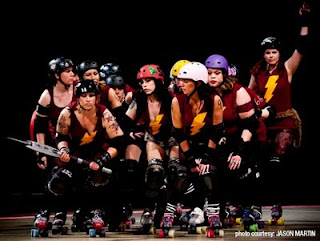 To my beloved home team the Valkryies Wrath,

When I saw the picture to the left for the first time last night I was over come by several emotions:

3. Pride - wow I actually belong to a TEAM!
I've never been much of a "team player" ever. Even my parents will tell you that. I was born with my fathers desire to play the drums to the fiery rhythm of my own heart so team sports were never really my thing. I never played little league. I was never a "timbit" (how ironic now that I'm Jam Buster.) I never had the desire to be part of a team. Scratch that....I vaguely remember being jealous of my brother who played softball for years. But I think my jealousy was centered around the fact that he got to have a popsicle or orange slices at halftime and I didn't and he got to go to Chuck E Cheez once for an end of season party. If anything I was resentful of all the time I had to spend sitting on uncomfortable lawn chairs getting eaten by bugs at some ball field on the other end of the city on a school night and having no one to play with during the games. 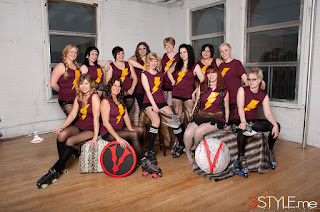 Before Roller Derby happened to me I had played exactly 1 team sport. I was on my high school rugby team for three years. We won exactly 1 game. And it wasn't even a real game. It was an exhibition game in my grade 12 year against a team from Brandon that had never played a game against any other team ever. Needless to say the next year that team from Brandon took the Provincial High School Championship. Not bad. The reason I played rugby was for a few reasons, one of my Aunts had played rugby for my high school and I wanted to carry on the family tradition, two it wasn't your typical female sport and three, I had a rather lousy grade 10 gym teacher that told me I had no real athletic ability so maybe I should consider playing rugby. Yeah...a real inspiration that teacher. When I played rugby I never really felt we were very "teamy" we were varying grade levels and the position I played (scrum half) meant I was on my own a lot. I've always seen my years of playing rugby as a catalyst to playing derby but only because it unleashed my willingness to get knocked down and my inner badass.
Being part of a roller derby league and in turn part of a home team has given me something I've never had. The joy of saying "MY" team. I've never experienced that. Playing with you on April 30th was probably one of the best things I've ever done. Honestly, it ranked up there with my wedding, University graduation and the birth of my godbabies and niece. That's how strongly I felt about those games. I will openly admit my dear Valkryies I cried in the car after the game (thank god for sweating and getting hit in the face no one noticed the running eye make up.) I was so proud and I felt so good about being part of your team and have the honor of being called a member of our team.