"You are Skillful and Delicious" 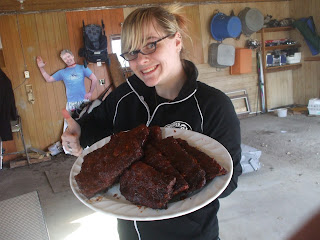 Or at least that's what John said to me after he took this picture. After spending the easter weekend smoking meat at the inlaws farm I smelled of campfire and barbecue sauce. Step aside "Lust" solid perfume from Lush Handmade cosmetic that I wear almost daily, campfire and barbecue sauce with a hint of hickory and meat seasoning is the way to get noticed by my man! Oh and yes that would be a cardboard representation of my brother-in-law.

I should give you some background on my love of smoked meat. My maternal grandfather was a butcher. My paternal grandfather was not a butcher but a lover of meat. I grew up eating high quality butcher meat. Good German meat. The smell of my favourite butcher shop/German import stores takes me back to a place in my childhood that I love. But get this, a treat when I was a kid was "square sausage" aka no name brand ham or bolgna. My dad is an avid barbecuer or as my American friends would say and avid griller. I learned how to barbecue/grill after I got married and John bought me a book by Dr. BBQ. Using that and the internet I taught myself to grill everything from veggies to pizza.

Last year John took a course in competition barbecue judging after spending a year trying to find a course to take after a love at first sight moment the TLC's BBQ Pitmaster (first season...not that rubbish second season). That is something he is super proud of. He's a member of the Kansas City Barbecue Society and is a card carrying BBQ judge. So we like to fancy ourselves super amature pitmasters. 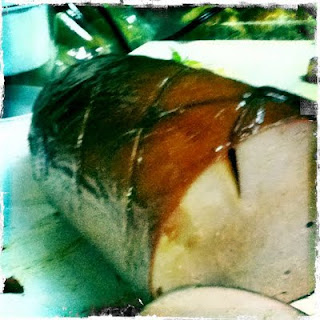 Before going any where NEAR the $20 worth of ribs we brought with us to the in-laws farm we thought we would practice. We practiced our smoking skills on some bologna. My husband and I are avid reader of Paddio Daddio BBQ which is where John found the barbecued bologna recipe.

Needless to say we're HUGE fans of this bologna. As a hardcore foodouche (I don't like foodie and really I can be a real douche about food sometimes) I never thought I would like this bologna as much as I did. I knew I would like it if not only because it was "forbidden fruit" when I was a kid and I get a small thrill out of eating something I'm not suppose to but honestly, it was YUMMY! Oh and fried with eggs instead of bacon....AWESOME!


The next day we embarked on our epic rib adventure. Let me first say John hasn't always been a fan of ribs. He always thought it was so much effort for not much meat. My older brother on the other hand and put away a full slab of ribs without even trying (I get indigestion just THINKING about that!) I personally love how my mom makes ribs. Although it wasn't until maybe two years ago that I learned how truly uncomplicated they are (I won't spill the beans mom). After flipping through our favourite barbecue book (Paul Kirks Championship Barbecue) we decided on doing traditional KCBS ribs. We figured we could try something that was tried and true and not to out there for the rest of teh people we were feeding. I'm not saying that to be disrespectful I'm just being realistic. I love John's family but I know that had I made say Cajun spiced ribs there might have been a revolt at the dinner table (seriously, you should have seen what happened when my mother in law ran out of ranch dressing the night before. We almost had dinner anarchy on our hands.) 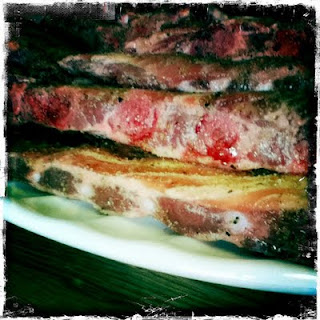 Before leaving the city for the farm I had prepared the barbecue sauce and the seasoning. After tasting the sauce I quietly vowed never to buy barbecue sauce in a can ever again.

After preparing the ribs whilst John prepared the fire that morning I had to take a moment and sit back and just stare at the awesomeness tht were these ribs. Honestly, being a butcher granddaughter I found myself suddenly feeling a little emotional because my Opa wasn't here to see how skillfully I had trimmed and prepared the meat. He would have been ridiculously impressed but some what baffled by the fact that I had done it all by myself (my Opa was a bit old school in his thinking on what women were capable of.)

After they went into the smoker we spent the rest of the day sitting outside reading and drinking. At one point we did have to move everything to the garage because the wind was just being dumb. But overall it was a nicely spent day.

The result. Well I'll let the pictures speak for themselves. 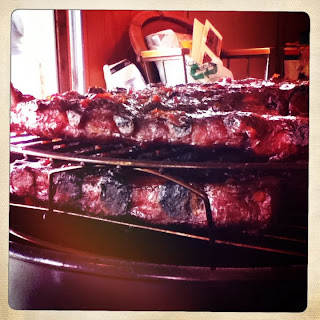 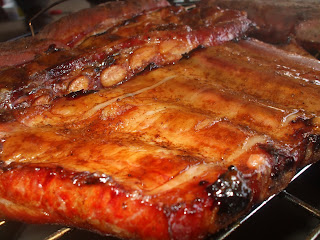 Next time we do pork butt.
barbecue food smoke

Jaimee said…
I'd like to think that Ryan's ribs at our BBQ was a stepping stone to you creating the perfect rib. I vote we have a smoker rib party this summer with our significant others. They look amazing@!
April 28, 2011 at 10:18 PM