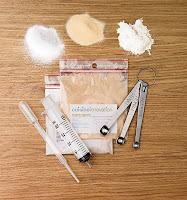 Tatiana: John I didn't buy any potato chips!!
John: No, but you have potatoes. Make your own.
Tatiana: I can't make my own!!
John: That's not what you said when we were out of mayo.
I'm a bit of a mad scientist in the kitchen. The husband once described me as, "One lab accident away from a super foodie villian." And I may or may not have listed my superpower on my derby profile as, "Culinary Awesomeness/Molecular Gastronomy" I do actually own a molecular gastronomy set. It's like a chemisty set for foodies. So I can make chocolate noodles or beer foam or rum and coke pearls in the comfort of my own home.
I recently made brown butter bacon ice cream. Oh yes my friends and it is AMAZING. I'm lactose intolerant so when I have ice cream it's not regular run of the mill ice cream. It needs to be special. I discovered the recipe late one night whilst surfing the net looking ice cream recipes that didn't require an ice cream maker. There are a few but I have come to realize the best course of action when making ice cream is to do it with an ice cream maker. Also I'm way to lazy to go back to the freeze every hour or so to scrape or stir it. So last Saturday I went on a mission to find an inexpensive automatic ice cream maker. Why was automatic important? First, read that part again about me being lazy and second, my parents have a big manual ice cream maker. I remember using it exactly twice as a kid. Once when we lived in Alberta and once when we lived in Newfoundland (we made blueberry ice cream that time and my mom had all the neighbour kids come over to take take turns cranking the thing...smart lady.) I had recently looked at an Ice Cream Ball at my favourite local kitchen store which while kind of neat in its concept I think the novelty would wear off quickly.

I ended up getting a small Cuisinart Ice Cream maker similar to one I had borrowed from a former co-worker. It has very few pieces and it came in mint green! Who doesn't want a mint green small appliance on their counter?!?

The main question I got about the ice cream was how does the bacon work in it? Well you don't just fy up bacon and throw it in. Oh no. You need to candy yourself some bacon. I'm an old hat at candied bacon. I've done quite a bit of trail and error in this departments. Here's the two things I've learned:

1. Cover the pan you're using in tin foil, this helps with clean up.
2. Use thin cut bacon. I'm a lover of thick cut bacon so I always buy it by default. 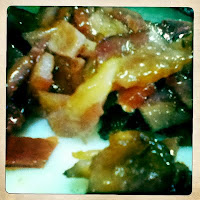 Sounds pretty basic but you would be surprised how much not so great candied bacon I've made. The tin foil is great because you don't end up with a sticky greasy mess to clean up. The thin cut bacon crisps up nicely and doesn't take as long. Also not as much grease

The recipe is not my creation absolutely not. It comes from a ice cream truck known as Coolhaus. Now I know a lot of people are going to be all "eeww ice cream and bacon!" But trust me it's not just fried bacon thrown in vanilla ice cream. It's candied bacon in some amazingly awesome ice cream. 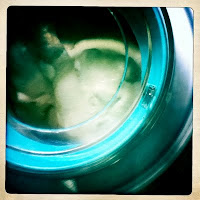 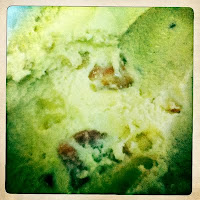 Preheat the oven to 400F (200C).
Lay the strips of bacon on a baking sheet lined with aluminum foil, shiny side down. Sprinkle 1½-2 teaspoons of brown sugar evenly over each strip of bacon.
Bake for 12-16 minutes. Midway during baking, flip the bacon strips over and drag them through the dark, syrupy liquid that’s collected on the baking sheet. Continue to bake until as deep brown. Remove from oven and cool the strips on a rack. Once crisp and cool, chop into little pieces.

Melt the butter in a heavy, medium-size saucepan. Stir in the brown sugar and half of the half-and-half.
In a separate bowl, stir together the egg yolks, then gradually add some of the warm brown sugar mixture to them, whisking the yolks constantly as you pour. Pour the mixture back into the saucepan. Cook over low to moderate heat, constantly stirring and scraping the bottom with a heatproof spatula, until the custard thickens. Add liquor, vanilla and cinnamon, if using.

Chill the mixture for about 5 hours. Once thoroughly chilled, add the remaining half and half and blend. Pour
into ice cream maker. Add the bacon bits during the last moment of churning, or stir them in when you remove the ice cream from the machine. 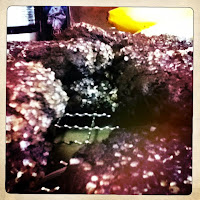 The other kitchen mad science that happened over the weekend came in the form of something called diablo cookies. ooooOOOoooo. I stumbled on this recipe when playing with the foodnetwork app on my iPod. I love chocolate and chilis (even after my epid mole fail.)

AWESOMENESS!! Try them! Seriously!
This weekend we're heading out to the husbands hometown which means I will have access to a smoker which means I will have my first smoked meat adventure. You see my husband is a Kansas City Barbeque Society certified judge. He judges competition barbecue for funsies (I do derby he does barbecue) so we've been looking forward to giving smoking a whirl. We're doing competition ribs and baloney. Oh and for the benefit of my American and Canadian readers, Barbecuing in this context means smoking. What American's call "grilling" is what we canadians call "barbecuing." Hope that makes sense.