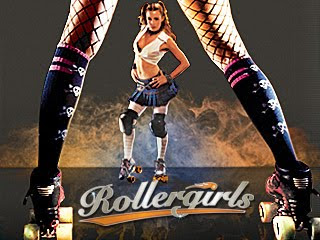 It's a well established fact that my best friend is pretty much the most awesome person on the face of the planet. I wish everyone could have her as a best friend...no wait I don't wish that at all, I'm selfish I'm keeping her and you can't have her (although I have heard she will hire herself out to be your temporary best friend on a short term contract basis if you have a sudden need for one.)


My best friend in her infinite wisdom and awesomeness tracked down a DVD set that has alluded me for sometime. One of the things that got me involved in roller derby, like MANY other derby girls was the TV show "Rollergirls" on A&E. The show was on the air in 2006 and was cancelled after one season due to low ratings. The show came out just before the really epic spread of roller derby. There were many leagues at the time but not nearly as many as there are now. I remember seeing the first season on DVD and thinking, "Oh they'll make another season." After those 13 episodes there wasn't another season. I have spent 5 YEARS trying to track down this DVD set. It's gettting harder and harder to find. But Jamie the best friend extrodinare found it and mailed it to me.

Oh the happy dance that ensued after I opened that box. I think I scared the cat. This show made roller derby real to me. My dad watched it with me often because he use to watch derby with my Oma (yes my Oma) on TV on Saturday afternoons. It rocked my world. I suddenly realized there was a sport out there for me that I should be playing but wasn't. There was a community of women out there that were empowered and engaged and so friggin' badass it was ridiculous.

Last night I sat down and watched the first three episodes again and I found myself experiencing it on a totally different level than I did the first time. It still rocked my world but in a totally different way. I wasn't on my couch longingly wanting to be a rollergirl anymore. I AM a rollergirl (admittedly I still want to be some of them). I also know the history of how these girls got to where they are in the TV show. It wasn't pretty, it wasn't easy and it wasn't well all the nice all the time. It's a really interesting thing to see that after having seen "Hell on Wheels" and having read, "Roller girl: True tales from the track." I'm now watching it with a whole new perspective on how hard roller derby is. When I watched it the first time I was all, "yay fishnets and make up and body glitter and hitting. YAY!!!" I had NO. IDEA. Needless to say since I joined my derby league I'm MORE than educated. If I may quote my dad, "I know how the sausage is made."

One of my biggest moments was seeing Smarty Pants pop up on my TV. I've trained with her! Or should I say, she trained me at our boot camp this last fall. I remember liking her when I first saw the show because she wrote a cute song about the Holy Rollers. There was no humanly possible way I could have predicted in my wildest imagical imagination that one day I would be hauling ass around a track with Smarty Pants yelling "Skate hard Jam Buster, don't let her hit you."

I get it all now in a totally different way and it's an amazing thing.

One rule though, don't watch derby drama before heading out to a derby meeting...not a good idea.