I've got confidence in sunshine.... 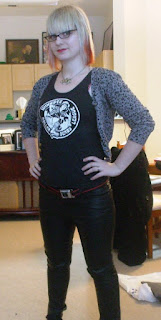 I'm pretty confident in myself. I'm pretty sure I'm a rockstar (or least I am in my own imagination) and I think I am pretty awesome at a lot of things. *at this point my husband will blurt out....and humble too!!* I mean look at that chick to the left, she looks like she capable of ANYTHING. She hosted a half time show at a roller derby bout not long ago. She also managed not to swear when doing media for said bout. She can make the most amazing pizza dough and her pasta sauce will make you laugh, cry and change you life. The girl to left can. do. anything.

Most of the time.
More often than not I'm just plain old me and I'm just bumbling through life just trying to keep my head above water. 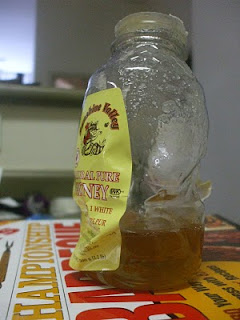 That incident is what lead me to today's blog post. The husband stated I should take a picture of the honey bottle and post it in my blog along with an entry about my kitchen nightmares. Apparently he didn't want me readers to think I was a perfect culinary goddess. Trust me I'm not. I've had some EPIC kitchen failures.

My first kitchen failure actually occurred the first time I ever baked something on my own. I don't know how old I was but I was making cranberry muffins for mothers day. I was so proud I was making them all by myself. I had baked with my mother and grandmothers for AGES. So little Tatiana was totally over the moon when everything turned out fantastically. It wasn't until I took a bite into one when I presented them to my mom that I realized something had gone horribly wrong. Okay, in the grand scheme of kitchen disasters it was fairly minor but to my young self it was horrific. I had mixed up my teaspoons and tablespoons. In the entire batch went 1 teaspoon of sugar. Please remember these were cranberry muffins. Here's the nice thing, parents will eat most things their kit puts in front of them.

More recently we had what we like to call "The Mole Incident" (the mexican chocolate sauce not the nocturnal creature.) There is an unspoken rule in our house that I will NEVER attempt to make a mole ever again. EVERYTHING that could go wrong did go wrong. I bought the wrong kind of pumpkin seeds and didn't realize it was until to late...they were not shelled), I got jalapeno in my eye, the mole was too hot when I tried to blend it with my immersion blender and we had a bit of an explosion (I think there is still some on the light fixtures (note: I have ten foot ceilings), I had the wrong kind of chocolate. It was just a disaster. It honestly tasted pretty good but it had the consistency of mud with twigs in it. I wasn't sure what the worst part was though, the hot pepper in my eye that caused me to writhe on the kitchen floor in agony of muddy twiggy-ness.

One last thing...never ever never grab a hot pan with oil with your bare hand and proceed to drop it and then slip on some of the hot oil and fall and hit your head. Don't do that. Just trust me on that. 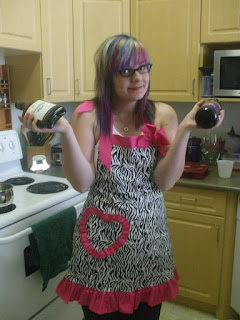 about me food mishaps