C is for Community and that's good enough for me 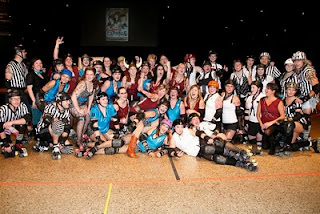 I have been very privilaged to have been allowed to walk the grief journey with several families due to a few jobs I've held. One in particular had me working with families that had lost a child at any age to any cause. The fact that those parents chose to get out of bed every morning was a testament to their strength and courage to keep living for their child. Grief is a scary and lonely experience. People seem to forget about you after the first few weeks. The thing I remember most though from my time working with and talking with these parents is that they wanted to know that they were not alone. The whole reason that organization existed was so parents knew they were not alone and their journey was going to be shared by not only those who had the commality of experience but by those who couldn't even concieve of the pain but were more than willing to carry them if they couldn't walk the journey.


In roller derby, no one skates a lone. I've talked a little bit about the amazingness that is the derby community. It's truly a brilliant thing to know that 60 derby sisters have your back when you need them. When you join roller derby you gain a family. My derby family is precious to me because I know if I EVER need them they will be there if called upon.

I've watched my league do some incredible things for others. This last Christmas we put together a hamper for a family of girls who were struggle due to some horrendous circumstances. We wanted to make sure they had a Christmas just like we all would. We also take care of our own. We've made, bought and eaten DOZENS of perogies to help sent the son and family of one our own to a special camp for kids with the same blood disorder her son has two years in a row. We've brought food over to help out two girls who broke their legs. We've helped with food and cleaning for another one of our own that broke a knuckle and had to have her entire hand/arm in a cast. There were a number of girls who would call me when John was traveling for work just to make sure I was okay and wasn't lonely. When I smoked my head on the floor at a Scrimmage in Fargo the girls I was traveling with took incredibly good care of me.

Our league members have HUGE hearts. You wouldn't know it by looking at us but we all care deeply in our own way for each other. So when one of us hurts all of us hurt.

Recently one of our former members who had been there sin 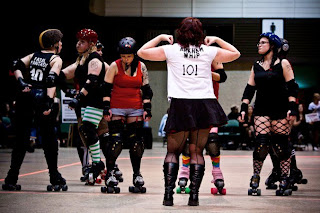 ce the early days of the league suffered a loss that I can only describe as my worst nightmare. Her wonderfully brilliant and talented and humble husband was taken from her due to a heart attack. My. Worst. Nightmare. My heart hurts for her. She is one of my favourite people, and I know this is going to sound horrific but, I can think of about 5 other people I would rather have this happen to. But no her. Never her. She is one of those people who dreams big and dares to make those dreams reality. She was one of the smartest people I had ever met and one of those people that you just naturally gravitate towards. I knew from the moment I met her I needed to be friend. The morning after our very first bout she came to me at the brunch and told me that my little victory moment after my grand slam was her favourite moment of the night. If I ever doubt my skills or my passion for derby I think of that little moment with Arkham Whip and smile.

This morning as I was loading some new stuff onto my ipod whilst I got ready for work the radio was still on. I was thinking about Arkham as I loaded some Doctor Elemental onto my playlist thinking that when the time is right I know she would find him wonderfully hilarious. From the bedroom I heard, "Time of your life (Good Riddence)" by Green Day. My dad (our MC) made sure that song was played at our wedding. I turned to John and started to cry. I looked at him and said, "Puppy, she's waking up without a husband today." As I listened to a song that was played on one of the happiest days of my life I was moved to tears knowing one of my favourite people was hurting.

Here's the beautiful thing though, my league, true to form, has sprung into action. We're working together to support her as she lives with a pain many of us can't even quantify. I've had friends who have lost grandparents, friends, children, pets but never a spouse. I've lost friends, grandparents, pet but never lost a life partner. We're doing what we can to protect and provide for our own. But there is hope. There is always hope. We will make sure she doesn't walk or skate alone.