Blessed are the cheesemakers 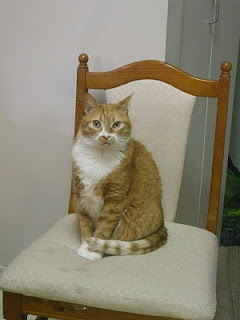 When people use the phrase "go to your happy place" a lot of people got to a imaginary place in their head. I often go to the world's best roller derby track where I have the exact perfect wheels for the floor which means I don't lose control at the top of the turn. I also have a physical happy place. My kitchen. Oh do I love being in my kitchen.

This time of year particularly stresses me out. I'm not near my family, I have a very sick grandparent, we have a disgusting amount of people to buy gifts for (the joys of marrying someone that is the oldest of five), I tend to constantly second guess my gift choice due to some rather ungrateful gift recievers in our family and I'm just a big ball of stress. Also it's peak donation season at work so I'm processing large amounts of donations which makes for some very long days.

So this last weekened I blissed out in my kitchen. I did several fun things that I've never done before. First I got the hair-brained idea I was going to make my own cheese. This goes way back in my relationship with John. Very early in our marriage John was complaining about the grocery bill. Please remember when I married him he had been on his own for quite sometime and subsisted on pasta and perogies for the most part. So the very idea of buying more than that at the grocery story made him want to stab himself in the brain. I purchased some cheese...he couldn't believe how much cheese costs. In frustration he blurted out, "Why don't we just make our own cheese." After I stopped laughing at him I told him no. Every so often ever since one of us has looked up how one would go about making your own cheese just out of curiousity on our part. Most of the recipes we found required things that I didn't know to pronounce let alone get my hands on. 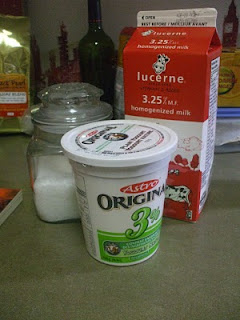 I was flipping through my Indian cookbook when I stumbled across their homemade cheese recipe. It required three things....three things I actually had on hand! WOOHOO! That's right it just needed salt, whole milk and yogurt. "But Tatiana, you're lactose intolerant why did you have whole milk!?" Because John is NOT lactose intolerant and if I made him only bring lactose free milk for the rest of his life he may actually leave me. Remember, I married a farm boy.

The adventure began with boiling the milk, then adding the yogurt and salt and then letting it simmer whilst stirring for about 10 minutes. Then I just let it sit off the heat for 20 minutes. Not very pretty but the smell wasn't bad. Just like sour milk so no biggie. I then dumped it into a tea towel. Idealy you want to use muslin/cheese cloth but I didn't want to go out to find any. I'm lazy like that. So into the tea towel it went. 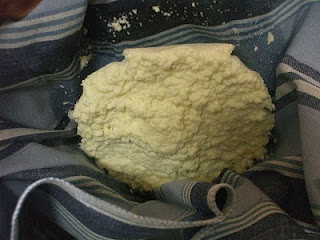 I should look like this! At this point it was like a chunky soft cheese. I'm told you can eat it at that point and we tried some and it was like a ricotta..a chunky ricotta. Very yummy. We have to let it drain for a few hours so whilst I drained I got to work on some other things.

I had wanted to make potato salad but found myself out of mayo. Now I debated running out to closest store to get some and 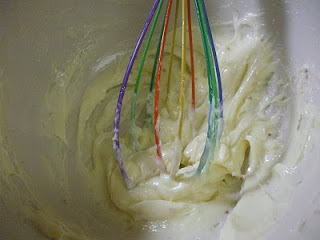 then I thought, if I won't go out for cheese cloth why would I go out for mayo. Then John piped up..."why don't you make your own?" So I did. One word of advice if you're going to make your own mayo, have someone to trade the whisking off with OR do it with a hand bender. Thank goodness for all the pushups I do for roller derby!

Now, keep in mind too homemade mayo = raw eggs so if you're squeemish about that sort of thing, homemade Mayo may not be your thing.

After dinner it was time to check the cheese again. We figured it have drained as much as it could on it's own so now it was time to help it along a little bit. The instructions said to tie a knot in the cloth and put weights on it over night. We have to improvise the weights. We used cereal bowls and my motar and pestle. 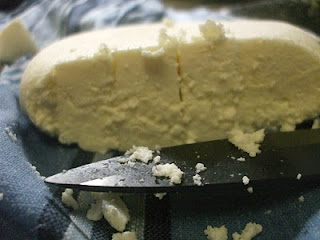 The next morning we checked the cheese. ooooooo it looked like cheese go team! There was a huge dent in it from the big fat knot that we tied in it. We think that will be prevented next time because I will actually use cheese cloth and not a tea towel. And it tasted not half bad either. Once we refridgerated the cheese it firmed up nicely.

I'm sure you're wondering about the Dylan picture and what he has to do with all of this. Well we've learned something about Dylan. When I'm in the kitchen he needs to be there too. Not because he necessarily wants whatever I'm making or using (unless it's pork...then he forgets himself and becomes quite ridiculous) he just wants to see what's going on. Now this causes a problem. You can see Dylan is NOT a small cat. By no means is his small so when he's underfoot in the kitchen he's really underfoot. So we devised a plan, we would put a chair in the kitchen. He could watch but not be underfoot. We didn't think it would work because if you know anything about cats you'll know they don't do what you want them to do out of spite. But Dylan is different. Dylan will happily sit on his chair and supervise. Win win situation. 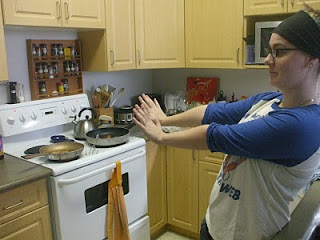 So what does this dubious housewife have planned for Christmas. In short, lots of stuff. I have desserts to make for family things. I have jelloshots to concoct and scallops to sear. I'm making candy for the first time and over the top cupcakes for not the first time. We'll see how this all pans out.
about me adventure food happiness kitchen