The art of the annual Christmas letter

November 19, 2010
Anything worth doing is worth OVER doing. 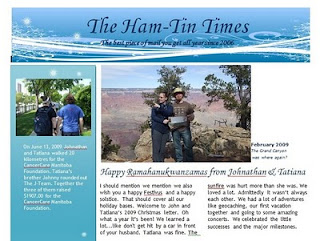 That my friends is a screen cap of last years annual christmas letter. It was three pages long, full colour and complete with hilarious classified ads. Every year since John and I have been married I have done an over the top christmas letter. Someone actually told John last year that our letter is one that they HATED to get because it was so well done. Me being the classic over achiever and attention seeking youngest child was delighted by the comment. Though the other comment we always get is, "Oh John's part is SO funny." Yes, I know...he's HILARIOUS! Last year he did most of the classifieds. The year before, told everyone not to believe what I had written in the Christmas letter. I can't remember what he wrote the year before that but I'm sure it was a real knee slapper. 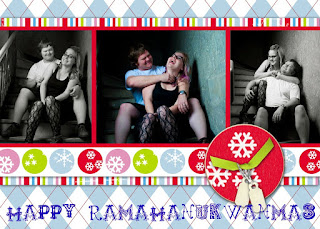 Now I'm sure if I wasn't sure an over achiever I would send out cards like you see to your left. That took me all of 5 minutes to whip up when doing what we send out takes...well...not 5 minutes. I've been working on the content for the christmas letter for about two weeks now. I keep a similar layout because why reinvent the wheel. Though the colour theme changes every year. This year I'm thinking green.

What have I learned for doing these three page epics that I call an annual christmas letter that are really fancy pants showy look at us newsletters (then again what christmas letter isn't) oh I've learned quite a few times.

Rule Number 1. People like pictures. Lots of pictures. The more pictures the better. People don't want to read three solid pages about us that want to read little blurbs about stuff and our adventures but they want to see pictures more than anything. Why? Because pictures truly tell them all the need to know. "Oh look it's Johnathan and Tatiana in New York." "Hey there is Tatiana doing roller derby. Fantastic." Lets just say the pictures fill in the gaps.

Rule Number 2. Printing them at home is WAY over rated. God lord is it overrated. Cheaper my derby tightened ass. I tried it the first year...never ever ever ever again. Some much ink was wasted, the colour wasn't even, paper was eaten. With the hour I spent fighting with our printer I could have had it done at Staples. Oy. So from now on I do it at Staples. They even collated for me. Tremendous!

Rule Number 3. Don't take yourself too seriously. I mean come on, you're not that special. We're thinking of opening this years christmas letter celebrating the fact we're the only people we know who didn't procreate this year.

Rule Number 4. NO POOFTERS (5 points to the person that can name that reference.)

Rule Number 5. Even though you've given it to your husband to proof read doesn't mean he'll actually do it. Proof read it yourself.

We have had a request for true tales about brave animals in this years letter...so we'll see. We're still not sure about the free ham to everyone who gets a letter request though.
christmas family John letter writing