Captain of the Carpet Ship

John and I do not have children. No. That's a whole other post in and of itself. But what we do have is a Dylan.

Dylan howled and cuddled his way into our life in February. He picked us out at Winnipeg Pet Rescue. If you've ever been a pet owner you will know that pets pick you, you do not pick pets.

Here's how it all went down. John and I had been discussing for a while about getting a cat. We both grew up with pets but the difference is that I had house pets and John had farm pets. We finally decided having a pet would be a good idea. There seemed to be a cat shaped hole in our little family...we just didn't realize it was Dylan sized.

We went to the shelter (a no-kill shelter) on a snowy evening. We actually went looking for a totally different cat. I had seen a cat named Marely on the website of one of the local papers. My heart needed to have her. When we went to go get her she had been snapped up between the time I had called to see if she was still there and when we were able to get there (about 24 hours later.) She found her forever home so I couldn't be mad. Then we started looking at other kitties. We saw so very many kitties. One that we knew just by looking at him that he was insane. He had that look....that insane crazy look. You know the one. Then there was Mama Mia who had a bit of a weight issue. Okay that is an understatement....she couldn't put her front paws together. We looked at kittens...we didn't have the time to train a kitten. We looked at Siamese kitties...they had to come in a pair and we didn't want two cats. I cuddled one cat that hissed at me. So no to that one. The whole entire time there was this large orange cat named Dieago just howling at us from the far corner. John gravitated towards him instantly. He said chubby red-heads needed to stick together.

When we took Dylan out of his cage and just FLEW into our arms. He made himself at home instantly. All 19 pounds of him.

Yes our cat weighed 19 pounds....our goddaughter Haylee only weighed a few more pounds than our cat...and she was 2. Needless to say we've been working on that (he's down to a respectable 15.5 thankyouverymuch.)

The first thing we took care of when we brought him home was his name. He was NOT "Dieago". He just wasn't. Come on....look him.

He got his name whilst we were watching our favourite comedian Dylan Moran. We had already commented a few times that Dylan would look interested for a second and then be all "wait...what?!" We were watching the part when Dylan Moran talks about how the irish don't go to war and says, "there's a what on..a what? Oh I'm not dressed." We looked at each other and then at our cat and said, "DYLAN!"

Now we're not weird pet owners. Dylan is NOT our "fur baby" and we don't treat him like a child. Dylan is a pet. We mess with him. We make fun of him. We get annoyed by him when he decides that 3am is cuddle time. We get mad when he decides to bite when he's playing. He's a pet. But we love him. He is a joy. He is the perfect addition to our family. 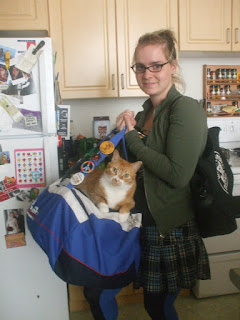 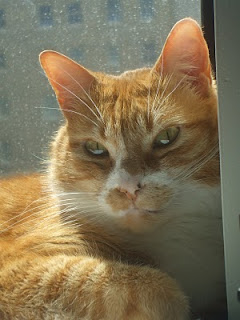 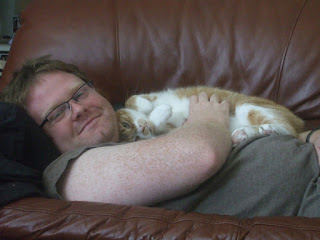