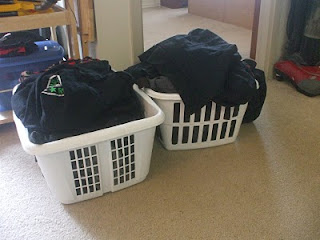 I'm not a fan of laundry. Never have been. I have always enjoyed sorting everything. I'm neurotic like that but the actual chore of doing laundry actually makes me want to hide behind a rock. I avoid laundry like some people avoid communicable diseases. It's sad I know.

My best friend on the other hand LOVES doing laundry. I overlook this weird personality quirk of hers and love her in spite of it.

Today I decided I would do the task that was bothering me the most. I feel this is the most constructive way to tackle that overwhelming 'what should I do first feeling.' The one thing that has been bothering me the most would be the laundry. There is so much of it because I avoid it. And I'm a bit of a recovering clothes horse so I don't notice as quickly as other people that I should probably do laundry. I just pretend it's not that bad and find a different black tshirt to wear.

I also use the excuse of us living in an apartment building where we pay for laundry as a huge excuse. At our previous place we had free laundry and it was really accessible. There was rarely a worry that we couldn't use the washer and dryer and there was no fear of not getting back to the machine on time or someone else would dump your stuff and put in their own.

So I made the decision to destroy mountain o' laundry. I proceeded to whine and complain about it to anyone who would listen. My mother...who had zero sympathy for me. I actually got an exasperated mom lecture. I could hear her eyes rolling over the phone at my excuses. I bemoaned my laundry woes on bookface and whined to the husband about it. But eventually I did it.

It may have taken me 4 almost 5 hours...give or take. Yes there was THAT much laundry. John babysat me whilst I put EVERYTHING away. I even ironed stuff. Tis one of the few times my iron has been used for it's intended purpose and not for ironing derby numbers and names on to shirts.

But I did it. Now lets see if I can make it a habit. I'm told...I don't know if this is entirely true...it's just a rumour I heard. If you do laundry more then when you run out anything respectable to wear in public it takes less time and become less crappy to do and a habit.

Craziness. I'll report back on my findings of this myth.
chore laundry to-do